I really miss sewing.  Since Dear Daughter has been home for the summer, we've started on remodel/redecorating the kitchen.  I would love to show you some before and after photos but I accidentally deleted all the photos on my camera SD card!  So I guess when we are all done, I'll just show you after photos.

Update:  I remembered I send my friend Beverly a before and after photo of one wall of the kitchen!


Dear Hubby has finally returned to work since his foot surgery in April.  He was ready to get back to his guys.  I think he was tired of being stuck at the house with us girls!  I'm so glad his foot is better.  It has been a long road to recovery and he still has a long road ahead but he's feeling little to no foot pain so he's headed in the right direction.

Dear Hubby and I eat a Keto style diet.  Last year after his accident, when he returned to work, his uniforms were a little tight.  After his recent surgery he didn't want weight gain again we both stuck to a strict Keto diet and his uniforms were a little too big this time.  I've lost about 32lbs and many inches and Dear Hubby has lost about 25lbs or more.  It was such a relief to not stress over his uniforms fitting this time around.

Even though here in Florida the temps are over 100 degrees, I am ready to do some Fall sewing.  I think that my agenda will be in the colors of grays and blacks and whites....maybe some purples.
I want a gray midi dress with long sleeves, maybe some type of wrap dress and a gray skirt.  I still need to sew up a cowl/drape neck top in white and maybe one in black.  Since loosing a little weight I need slips.  The ones I have fall low on my hips and show at my skirt/dress hems.  I could just trim them........... we'll see.

I found a Craigslist sewing table earlier this month.  It's nothing too fancy and I think I may rework the hardware on the front so it doesn't scream 70's!  But it's in nice condition and it was a great price $40! 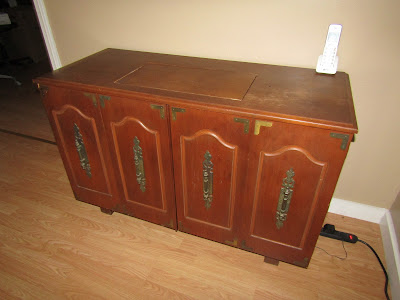 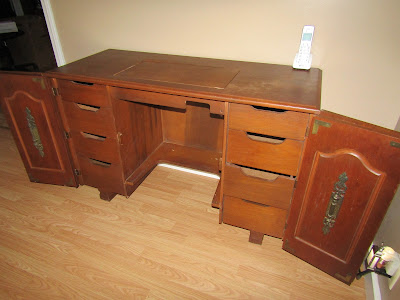 I hope to be able to sew soon.  School starts back on the 10th and I will have the house to myself again.  Maybe I can get back to my sewing room and since no one will be home the house will stay clean!

Posted by Bonnie @ sewplus.blogspot.com at 5:00 AM No comments:

I took the McCall 6844 pattern and redrafted it to be shorter, more rounded at the bottom and pleats at the shoulder, then I added shoulder pleats!  I can't believe it turned out!


I had a yard of this retro abstract print ITY knit fabric left over from a dress.  It made a perfect cardigan for my black ponte knit sheath dress for the summer.


Sewing will be slow the next few weeks since I've decided to start remodel/redecorate the kitchen. Dear daughter is home for the summer I might as well put her to work!  (Truly she's much more flexible and able to do stand in odd positions to paint and stuff!)

Growing Out My Gray-7 Month Update

I try to get Hubby to take Sunday selfies with me.  It keeps me updating my gray hair growth.  Since it's all grown out now, I'm all natural, colored by Mother Nature!

I have my hair parted on the less gray side, It does look darker, my skunk streak isn't showing as much here.

After looking at the most recent selfie, I already need a haircut.  I have an appointment on the 19th, I hope I can make it that long!

I don't have any comments about the gray anymore.  That's a good thing.

Simple summer ITY Knit maxi tank dress.  I like the print, it says "summer"!.  Sorry it wasn't anything spectacular or new, it was my usual TNT pattern.

I used my usual Steam-A-Seam 2 to fold over the neck edge and the armholes.  I used a simple stitch to finish it off.


I took the McCall 6844 cardigan pattern and did a little re-drafting.  I added 1-1/2" to the center front, shortened the length to 22", and rounded out the bottom front.  I just used Steam-A-Seam 2 to finish the cardigan along the front, neck and lower back hems.  Easy enough.

I'm thinking of redrafting another cardigan pattern to add pleats at the shoulders.  I'll let you know how that comes out.

Bonnie
Posted by Bonnie @ sewplus.blogspot.com at 5:00 AM 4 comments: