I would like to Thank you for all the kind comments and concern during my Dear Hubby's ladder accident and broken leg.  You'll never know how much it has meant to me & kept me positive.

We are hoping for the best but.......he gave me another grey hair last week.  After getting him dressed and sitting him in his wheelchair in the kitchen so that I could put a dress on real quick he thought he could get himself a q-tip out of a cabinet in the kitchen.  He fell, hitting his eye on the kitchen counter & slicing his forearm.  Unfortunately the q-tip won!

This is what happens when you don't listen to your wife when she says "STAY SEATED!". 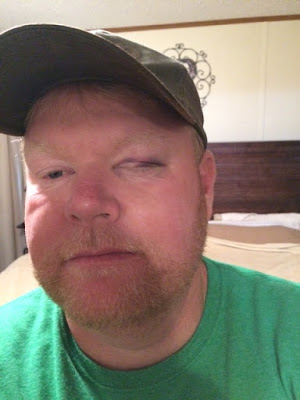 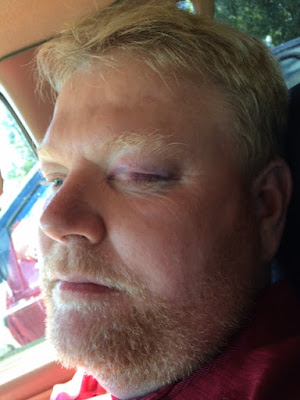 We didn't make it to Church, or out in public for a few days.  He cut his arm pretty bad but it could have been worse.  I'm glad he didn't hit on the cheek bone or the brow, we would have been getting stitches then.

It's a slow progress in recovery and my sewing is very sporadic to say the least.  I did get a little job of hemming 10 pair of pants for the Sheriff's Office, hopefully it will turn into something ongoing.

Missing all my sewing friends

Bonnie
Posted by Bonnie @ sewplus.blogspot.com at 5:00 AM 6 comments:

Dear Hubby had planned on fixing our leak in the roof at the fireplace chimney last month.  The company where we purchased the metal roofing from delayed our order for over two weeks, delaying Dear Hubby in replacing the leaking metal by a few weeks because he works night shift and he was sent last week to Ft. Lauderdale for training.

He was summoned home early because of the storm and had Thursday available to replace the metal roof before Hurricane Matthew arrived.  We had a day of preparation around the house to do before the up coming storm.

Well..........Dear Hubby was getting off the roof and while on the top rung of the ladder, the bottom slipped out and he fell about 10' from the roof onto our pool deck.  Having him yell for me was one of the worse sinking feelings in my stomach I have ever had.  Finding him laying on the deck in severe pain was the WORSE feeling I've ever had.

I do not do well under stress!

After a moment of panic, nausea and sheer terror, I begged him to let me call 911 because I couldn't help him up.  His hip and leg were in terrible pain.  I was sure I was going to be sick.  I knew I had to hold it together.  It's funny how you remember odd things during a crisis.  I have never in my 42 years had to call 911.

I did it and the ambulance, fire truck, two deputies and two neighbors showed up within 5 minutes.  The EMT's cut my very modest husbands' clothing from him, assessed his injuries, had him in a Aspen collar, on a board and off to the local (1 hour away) trauma hospital.  The EMT's decided the Trauma hospital since it was a fall and they initially thought that he may have a broken hip and multiple leg fractures.

I must say there is nothing like a hospital that specializes in Trauma injuries.  Dear Hubby remembers that upon arrival at the emergency that there were over ten staff members waiting for him.  As soon as the gurney wheels hit the ground they were working on him.  He said that he was attended to by so many people and so quickly.

By the time I drove the hour through evacuation interstate traffic Dear Hubby was coming out of his Cat-scan.  I was driven by the Valet to an entrance, told whom to ask for and quickly directed to my husband's bedside.


The staff was so caring.  Not only concerned with my husband's needs but mine also.  They allowed me to stay overnight the whole three days. Making accommodations for me and making sure that I ate and got fresh air during my stay.

After several consults with an orthopedic surgeon and a staff of doctors and trauma nurses, Dear Hubby has a broken fibula (small bone in lower leg), possible torn tendons, a severe ankle/foot sprain and many abrasions and bruises.

I am so thankful for the wonderful care at the hospital and that Dear Hubby is now home with a an knee immobilizer leg cast and a bottle of pain meds.  Which he refuses to take.  He's managing his pain with Ibuprofen and rest.  We are scheduled to call the Orthopedic Doctor this morning for an appointment which will let us know the extent of damage to his leg and ankle.


I hope that he will make a speedy recovery and that things will get back to normal soon.  It's been so long, I don't even know what normal is anymore.

PS The good news is that the storm was just enough off shore that we received only 1" of rain and minimal wind damage.  We need all the luck we can get!

Still No Sewing but ANOTHER Hurricane!

Sorry for the absence of my postings.  There has been no sewing going on this past month.  Now that my back is feeling better I have been doing a little remodel/redecorating in the house and now we have ANOTHER hurricane.


We are fortunate enough to be in just the outer area of hurricane Matthew but still the wind gust are expected to be between 39-79mph.  That is enough for me.  We will be evacuating to our son and daughter in law's home since they live in a block home.  Hopefully we will be able to return home late tomorrow evening.

One of my biggest peeves during storms like this is that people refuse to evacuate.  Since DH is in law enforcement is angers me that they expect to be rescued during a storm just because they didn't want to leave.  They don't consider other people's safety is being risked just because they are stubborn.  I will just have to pray....  Dear Hubby will be working during the storm and I worry about not only falling trees, but power lines and people trying to drive during the storm but also people expecting rescue during high winds.  But another danger is that people will be cooped up all day with each other drinking alcohol and they start fighting, calling law enforcement, needing a referee!  Sorry for the rant, I think it's from the drop in air pressure!

Prayers for Florida and that we all stay safe and are able to return home soon after the storm.  Also hoping that my sewing mojo returns soon too.

Posted by Bonnie @ sewplus.blogspot.com at 7:03 AM 4 comments: