I found this tie-die looking skirt at Beall's Outlet and I knew I had fabric to make a top or two to coordinate with it.

This orange knit was from Fabric Mart Fabric in a FREE bundle!  2 yards of beautiful knit in my favorite color!

﻿
﻿
I copied my TNT short sleeve pattern, marked the center from hem to sleeve cap, cut, added 3/8" seam allowances and then cut out my sleeve (4 pieces).  I hemmed the slit with Steam A Seam 2 Lite then stitched.

Assembling the sleeve, I hand stitched 1-1/2" from at the bottom and top seam allowances on the slit.  Sewing the sleeve in flat (my favorite way with knits!) the sleeves were sewn in a jiffy.

Great look with a few minutes spent on a little extra something.


﻿
I like the sleeves and the cowl neck.  The only thing I a going to work on is the fit at the waist.  I think the top looks a little boxy.  Easy enough to fix but I will wear it once or twice to see for sure.

﻿ I can't wait to wear this outfit.

Girl M. asked me to sew her an Easter Dress.  I was giddy with excitement!

Trying to find time for her to sketch it out for me took over three weeks.  Finally one morning at the bus stop she drew it out, explained the fabric she wanted and the style and off to her busy life of school and softball practice she went.

I went home with my cherished drawing and whipped up a muslin of a simple t-shirt dress for her.

Believe it or not, she LOVED it!  The pattern had a few tweaks I needed to make for better fitting on her but she hung the wearable muslin up in her closet to wear!

﻿
﻿
﻿
She has a beautiful eye for style.  She wants a simple sleeveless, knee length knit dress with a long sleeve, maxi length lace overlay.

Until she wanted to change the neck opening style, wanted an exposed zipper, a slit in the side of the lace  to her knee and the under skirt shorter!

The knit fabric didn't allow for a zipper.  It was so stretchy so I had to eliminate it.  The lace looked too much like a bridesmaid dress when it was floor length.  I cut it off.  In the end, she LOVED her dress.

﻿
I only had a day or two to sew up something for me for Easter.  I thought that this ITY Knit fabric looked like an Easter egg.  The McCall 6844 cardigan was a quick sew.  I used view A.  I also used the burrito method for the collar piece.  My go to tutorial is here.

﻿
﻿
﻿
﻿﻿﻿  I need some warm weather t-shirts since Spring lasted only a week here.  It's now humid and in the upper 80's every day.  I am going to dig through my lovely selection of knits to see what I can up with.

Posted by Bonnie @ sewplus.blogspot.com at 5:00 AM 2 comments:

I have been thinking of purchasing a small handheld vacuum cleaner to clean out my sewing machines.  I've seen one in the Nancy's Notions catalog but I decided to look on Amazon to see what was out there.

Believe it or not, I used to sell vacuum cleaners.  I worked at a Janitorial Supply business that also sold Vacuum cleaners, did repairs and we also sold swimming pool chemicals, did repairs and  serviced pools.  Talk about ALOT going on in a tiny little office!  When the kid's were little I used to tell them I sold toilet paper!  They didn't think it was as funny as I did!

Back to cleaning my sewing machines....  I do my best to use my little paint brush an sweep out my machine about one a week or two.  But I'm thinking a little handheld vacuum would suck up the lint and fuzz better than just sweeping it onto the table and under the machine. 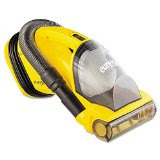 I have a micro attachment set that would work with the vacuum.  The bad is that is weighs 6lbs and is 15"x7"x7".  That's almost double the size of the one from Nancy's Notions.  I really don't need the brush roll and stair cleaning/floor cleaner area in the front. 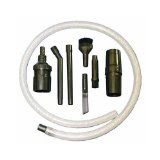 But now that I went over to the Nancy's Notions website I really like the little vacuum they offer!  It's sooooo tiny!

With its powerful suction capabilities and attachments, clean-up couldn't be easier. 5" x 9"; 6-1/2" high. 3 lb. 15 ft. cord.
Oh yeah, I also need a bottle of machine oil.  My last bottle was over 20 years old and one morning I found it on the floor in the sewing room.  SOMEONE must have knocked it over when they came in to get something off of the shelf.  Well I spent the whole day mopping and cleaning machine oil.  Now my sewing room has the smell of a genuine sweat shop! 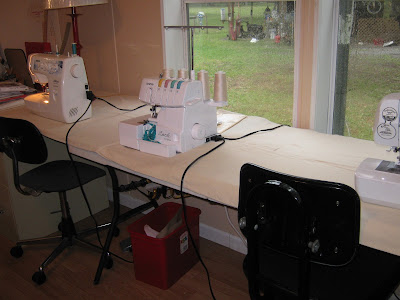 My Mother gave me two extra long rectangle table clothes made from muslin!  They are perfect for my sewing table.  I had black felt on the table top but it would catch my fabric and every thread stuck to it.  Spring cleaning and a little "new to me" table covers.  It's all good!

I'm off to buy a vacuum, some oil and a new Stretch Twin needle I just broke!

Bonnie
Posted by Bonnie @ sewplus.blogspot.com at 5:00 AM 2 comments:

She let me snap a picture before Church last week of her.  She's looking all grown up!  I can't believe she's 14!  When I look at her I still see the little girl with two waterfall ponytails wearing a swimsuit, a tutu and cowboy boots.  Because that's what she liked!

I had to make something that would boost my confidence.  After the disaster in tree cutting and sundress making, I decided to make the Butterick 5778 Again!

I had a yard of Grey/Black/Yellow/White ITY Knit and 1yard 24" of a Grey (not scuba knit), maybe a  techno knit.  I had to shorten the dress skirt length to knee length to make the pattern fit the fabric.

﻿
﻿ Being a little short on fabric for the bodice, I improvised using a piece of the skirt fabric for the front bodice lining piece.  You can't see it from the outside.

﻿
I did add the waist ties and the waist elastic this time.  This dress looks very much like summer to me.

﻿﻿﻿
Or even Fall with a black cardigan and some boots.

﻿﻿
﻿﻿
Of course, I had to make a modesty panel.  I had just enough skirt fabric left over to sew one up.  I am going to have to look for some jewelry with bold yellow flowers.

﻿﻿
I am currently working on altering a bridesmaid dress.  I had to let out the hips a little, take up at the shoulders and add a modesty panel.  I had to look for black satin while I was out this week.
Until next time................
Bonnie﻿
﻿
Posted by Bonnie @ sewplus.blogspot.com at 5:00 AM No comments:

Not A Good Week: Tree Trimming Disaster & A Sewing Wadder!

My Dear Husband decided we needed to have two trees cut down.

They have been here since I was little, (about 37 years) and they weren't dying.  I thought they should stay, but I was outvoted.

He didn't like that the leaves fell into the pool in March and October.  But I just kept the pool covered from October to April anyways so they didn't really bother me much.

﻿
﻿
A friend of my husband came to cut them down.  He did a wonderful job, being so careful to drop the limbs and not hit the house or the pump house or the pool deck.  He was almost done on Saturday and all that he had left to cut down was the large trunk.

Well, wouldn't you know, the tree trunk twisted when it fell and landed on the corner of the pump house and the pool and the pool deck!

No one got hurt!

I almost had a nervous breakdown!  I don't do well with emergencies.  I had to go inside and laydown since I was going to be sick.  I just covered my head with a blanket and counted my breaths to 100!

﻿
﻿
﻿﻿
Once they removed the tree from the deck it wasn't as bad as it looked at first.  A few sections of railing had to be replaced, a few deck boards and a ledger board.  The pump house had to be rebuilt but Thank GOD it didn't damage our pool pump or our water pump and water filters and softeners!

A few pool parts are on order to repair the damaged parts but I don't think we'll cut another tree down!
﻿
﻿
One good thing was that after the guy rebuilt our pump house we decided to finish it.  We never finished the sides because we couldn't decide what to do.  Well, we just made it match the railing of the pool deck.  Now it looks like a good place to grow some cucumbers or jasmine!

In the mean time I was working on a sundress.  I used Simplicity 5845, I redrew the pattern and added my usual full bust and hip increase, I almost cut the pattern out and then I realized it was almost like the Simplicity 4265 I sewed up a million years ago.  So I decided to sew a muslin up of that pattern.  After working on it all week I gave up.  I don't know if it was the stress of the tree falling or I just wasn't feeling well but it ended up a wadder in the trash can!

﻿﻿﻿
I'm just going to move onto something that I know will work.  How about another Butterick 5778!

Bonnie
Posted by Bonnie @ sewplus.blogspot.com at 5:00 AM 2 comments: